Imagine tiny gadgets wandering around in your bloodstream, travelling into your cells to seek out infections and fight diseases… Does it sound too fantastic to be true? Let’s explore just how close this science fiction scenario is to a reality.

Before we get too far into this story, let’s first see where the idea of really, really small motors comes from. In 1954, the gifted physicist Richard Feynman issued a $1,000 challenge in his speech at Caltech.1 He offered a big prize to the first person able to create an operating electrical motor smaller than 1/64 inch (about 50 times smaller than a pocket-size flash drive!). Scaling it down was a great challenge since the effect of shrinking the size on the operation of the motor was unpredictable.  But to Feynman’s surprise, shortly after the speech, an electrical engineer built the world’s smallest hand-made machine at the time. The challenge-winning motor, while not quite on the nano-scale, undoubtedly inspired scientists and triggered research on future applications of very small, functioning motors.

As technology continues to miniaturize, it has entered into the realm of biomedical research. Specifically, nanoscale devices are being developed for use inside the body to interact directly with cells and to diagnose and treat diseases. Nanoscale motors have not yet unfortunately made their way into medicine, but there have been some exciting developments in the lab.

During the past-half century, smaller motors have been greatly enhanced with nanotechnology. Currently these engines can be synthesized at such a small scale that we cannot see them with the naked eye.  They are also able to function in air and in fluids, which boosts the number of applications of these tiny motors!  There are now numerous different types of nanomotors based on emerging nanomaterials with promising properties (such carbon nanotubes, metal nanoparticles and nanocrystals).  Each material differs in strength and freedom of movement as well as the environments in which they operate. While they may differ in some of their properties, they all function in the same manner – by consuming energy to produce movement.

As you supply energy in any form (light, electricity or fuel), the motors move, turn around or spin. It is the chief principle of all motors whether they are big or small. Think about the motors that we use in our everyday lives like ceiling fans or kitchen blenders; we supply electricity as energy to produce a spinning motion. What is even more fascinating about nanomotors is that their smaller size allows them to potentially be used in various applications, such as biomedicine where they’re small enough to fit inside the body!

Let’s look at one recent development to see how these motors work and what they might be able to do one day inside blood vessels. I want to clarify here that this research was carried out in a petri dish on the lab bench, not in animal bodies. However, this research is the first step toward the goal of nanoscale robots in medicine.

This example explores what we call ‘microbots’, which are 10-1000 larger than nano-sized objects. So, still pretty small!. They are small enough to fit in blood vessels but not quite small enough to easily get into cells. This permits them to function well in the task of moving cells. Using these microbots to transport cells from one point to another could allow researchers to remove unhealthy cells in a controlled fashion.

These ‘microbots’ are small tubes that are made of several layers of different metals. Hydrogen peroxide, the same chemical that we use to clean cuts, is used as a fuel for these microbots. Hydrogen peroxide is highly reactive and forms oxygen bubbles inside the tube cavity of the microbot. The bubbles act like the exhaust of a tiny jet engine, which propels these tiny devices forwards. 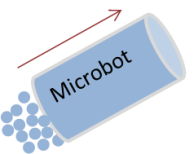 This self-propelled microengine is able to transport and deliver cells in a controlled manner. They can pick up distorted, unhealthy cells and transport them. You might be wondering what this is good for. Well, one example is that cells could get transported to a site where there is higher acidity, where enzymes can work to break down the unhealthy cells. This is similar to how a sandwich is digested in the stomach!

Okay, so these microbots can move forward, but can they turn from side to side? If I were to consider something a robot, the first thing we would have to be able to do is control its movement! Indeed, researchers can use magnets to control the rotation of these tubes. Once the microbots propel themselves to a desired location, one rapid spin of the tube with the external magnetic field enables them to release the loaded cells.

What is even more amazing is that they are not programmed for a single delivery! After releasing the loaded cells, they are ready for a re-load.  Researchers can make them continue to swim along the biological fluid in search of other cells.

Although these experiments are done in laboratory conditions in a cell culture, it is still fascinating to imagine the potential implications of these nanomotors. Scientists are working on being able to control these nanomotors inside of living material as well, which would enhance the possible applications. As this field continues to grow, we can imagine these nanomotors will be able to help with countless applications – from breaking down kidney stones to fighting cancer, breaking up blood clots, cleaning wounds and removing infections. The applications and advantages really are endless!

1. There’s Plenty of Room at the Bottom – Richard Feynman

One Reply to “Teeny Tiny Motors That Fit in Your Body”