We talk a lot about nanoparticles, which are nano-sized and nearly spherical. But, the shapes accessible in the nano-world are plentiful! For example, I recently made these! (click for larger images…  DO IT!) 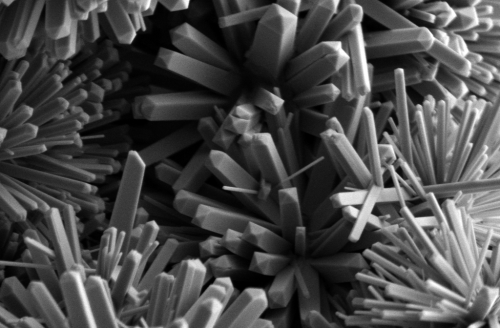 I like to call them “nano-Koosh-balls,” because of how closely they resemble the children’s toy of the same name. These nano-Koosh-balls are actually composed of bunches nano-sized rods (nanorods), all emanating from a central core.

Why would I want to make these, you ask? Excellent question! Non-spherical nano-sized objects can have numerous advantages over spherical ones. Just like a Koosh ball and a baseball would behave differently when tossed through the air, their nano-sized counterparts behave differently under a variety of conditions. The electrons in the nanorods that make up the nano-Koosh move around differently than they do in nanoparticles. This has enabled nanorods, similar to the ones in my nano-Koosh-balls, to be used in ultra-bright light emitting diodes (LEDs)—a super energy efficient lighting technology. Additionally, some nanorods absorb infrared light and emit the energy as heat. Infrared light passes relatively easily through body tissue. Scientists have coated the surfaces of nanorods with a chemical that will target the nanorods to cancer tissue. The scientists can then bathe that area of the body in infrared light, causing the nanorods to heat up and kill the cancer cells. I could list other applications for days, but I’ll stop here. I do want to highlight how many of the unique properties of nanorods have not only to do with their nano size, but also their unique, elongated shape.

You may also be wondering, “How the heck did she make those things?” Another excellent question! Basically I put all the chemical ingredients necessary into a sealed metal jar and turned up the heat. This did not cause an explosion, but it did cause the mixture to reach incredible temperatures and pressures. Normally this procedure might produce spherical nanoparticles. Initially, this was probably what happened. However, the particular chemical ingredients I included stick preferentially to one part (known as one “crystal face”) of growing nano-sized objects. This causes those objects to grow faster in one direction than in other directions (producing nanorods), rather than growing equally fast in all directions (producing nanoparticles). As to why they have that Koosh-ball-like property, we’re still not entirely sure! There is so much to figure out!