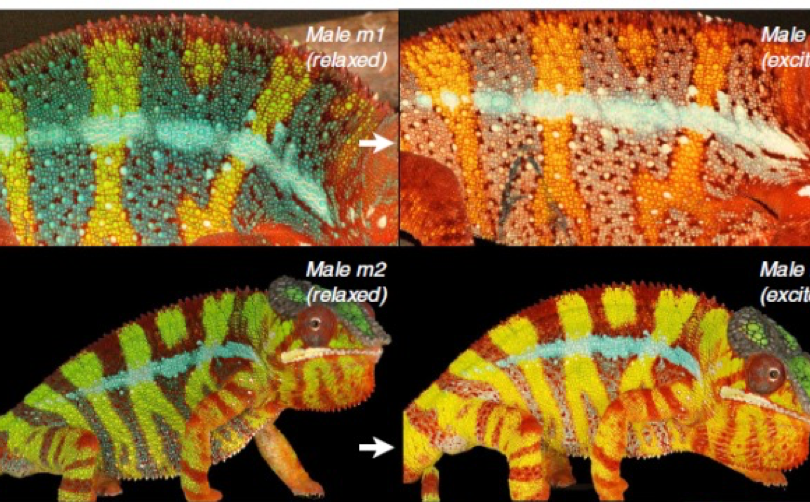 My favorite rain jacket is bright blue. So bright, in fact, that my first semester chemistry professor was able to point it out in a class of 300 people to explain principles of visible light and color. As it happened, the class benefited from two examples that day, my jacket and my face which turned a very bright red color from my embarrassment. Despite the start to the lecture, learning about the science of color turned out to be one of my favorite chemistry topics, and still is today because a lot of color we see in nature is directly related to nano-sized objects! In this blog post I’ll show you three examples of how animals use nanostructures to make their colorful exteriors.

There are two main ways we perceive color in an object: based on pigment and based on structure. When we see color based on a pigment (shown in Figure 2A below), it’s because the object has absorbed all wavelengths of light except the color which we observe. A surface with structural components on the other hand, (shown in Figure 2B) works like a grating, splitting up the different wavelengths of light, so the color we observe depends on the angle we’re viewing from.

Plants, feathers, fur, and human skin all contain compounds broadly known as “pigment.” You may have heard of a pigment called melanin, which is found in human skin. Based on what these pigments are made up of, they can selectively absorb and reflect wavelengths of light. For example, the feathers of a red cardinal absorb all other wavelengths of light except red, which is reflected and observed by eye. This principle applies beyond living things, to most of the colors we observe every day.

On the other hand, color can also be a result of structural components. Colors in animal exteriors, particularly birds and insects, sometimes appear “iridescent.” You may associate the term iridescent with other things like opal crystals, seashells, or bubbles on a sunny afternoon (Figure 3). Unlike pigment, these colorful arrays are due to the interaction of light with the structure of the material.  Colors from structure are slightly more complex than those from pigment. Nanoscale structural components refract, or split up, the incoming light into components of colors because they are the same size as (or even smaller than) visible wavelengths of light. So, the color we observe depends on the angle we view the material (Figure 2B).  (For more on interactions with light see our previous post here!)

Now that you have a little bit of background on colors, here are a few interesting examples of how nature takes advantage of nanoscale structures to give animals their unique colors!

Chameleons are a group of lizard species that exist in a range of colors. Many chameleon species are well known for their ability to change color. Chameleons change color for many reasons including camouflage, thermal regulation, and social communication. Typically, a transition to a yellow, orange, or red skin color is a sign of aggression towards another chameleon or animal. Cooler colors such as blue and green are often displayed when they are calm or submit to an aggressor. The exact mechanism for this color change was studied and published in 2015 by scientists who investigated the color changes of panther chameleons, a type of chameleon found in Madagascar.1

In one experiment they studied the skin of a ‘relaxed’ versus ‘excited’ chameleon. To do so, images of the chameleon were collected in a non-threatening environment to capture the relaxed state and then after a threatening event, in this case male-male combat.

You can see in figure 4 that the same chameleon undergoes a transition from the cool blue/green colors in his relaxed state to yellow, orange, and red colors in his excited state after being placed in male-male combat. This transition occurs over a time period of a few minutes. You can watch it happen in the video below. (Note the video is sped up by 8x so that we can see the color change more quickly!)

So what is happening when the chameleon is transitioning from a relaxed state to an excited state? Originally it was thought that the color change occurred because of varying distributions of pigment, either clumped together or dispersed far apart. This is true for some other animals (such as fish or amphibians2) however, people realized that the chameleon’s dramatic color change in a relatively short amount of time was likely not due to pigment transformations alone. The 2015 study showed that the transformation in color was also due to nanostructures in the skin!

What do you notice about the differences in the Relaxed versus Excited microscope images in figure 5? They are very similar, but when you compare them closely you may notice that the bright shapes are jumbled close together in the relaxed state, while in the excited state they are further apart, lined up in orderly rows. These bright spots are about 100 to 150 nm in size, and the researchers determined that they are actually nano-sized crystals of guanine. Guanine is a molecule that is an essential building block of RNA and DNA. The rearrangement of these guanine nanocrystals when the animal is relaxed versus excited results in the structural color change we observe in these chameleons.

Damselflies are like a ‘cousin’ of dragonflies. They have very similar anatomy, but are slightly smaller and, unlike dragonflies, rest their wings along their body when they are not flying. Damselfly species can be found all over the world (except for Antarctica). You may notice from the images below (Figure 6) that damselfly wings appear iridescent – the first clue that their colorful properties may arise due to nanostructural components! The color of a damselfly wings is important for protection (camouflage), and reproduction.

In one study, a group of scientists focused specifically on a Japanese species of damselfly (the full name: Calopteryx japonica).3 The study specifically looked at the differences in the wing veins between the male and female damselflies. The mature male (MM in the photo below) damselfly wings appear blue in color and the mature female (MF) wing appears brown (Figure 7).

A microscope image collected across a vein in the mature male wing shows differences from the top to the bottom of the wing, made up of nanolayers (Figure 8). The thicker layers are about 150 nm and the thinnest is about 50 nm. It turns out that the nanostructured layering in the wing is composed of different chemical components. The researchers figured out that one layer is rich in chitin, a derivative of the sugar molecule glucose, and is a long-chain polymer made up of carbon, oxygen and nitrogen. Ultimately, this nano-periodicity causes the wing to appear iridescent, giving it a unique color dependent on its nanostructural components!

In another study, scientists studied an Amazonion rain forest species of damselfly (full name: Chalcoperyx rutilans). These researchers were able to determine the structural differences within a wing, but also the chemical components of the layers of the wing – similar to the Calopteryx japonica. In this species, one layer is rich in carbon-nitrogen compounds and the alternate layers are rich in sodium compounds. Ultimately, this nano-periodicity causes the wing to appear iridescent, much like the soap bubbles in figure 3, giving it a unique color based on its nanostructural components.4

Bird feathers are another great example of iridescent animal exteriors (Figure 9). Several kinds of colorful birds come to mind, such as hummingbirds, parrots, and turkeys (which we’ve talked about before!). However, one of the most visually stunning bird feathers are those of peafowl, more commonly referred to by the name of the male bird: peacocks. There are two kinds of peafowl in the world: Indian (or blue) peafowl, and green peafowl (most zoos in the United States are home to blue peafowl). Peacocks are typically more colorful than their female counterparts, peahens, who have less coloration so that they may stay camouflaged in order to take care of their young.

Typically, peacocks have long ‘trains’ of feathers that rest along the tail (Figure 9). Peacocks first develop a train when they reach two years of age, however it is not yet colorful at this young age. Every year after that the feathers fall out and become more extravagant each time they grow in. When a peacock is fully grown, the train can reach 6 to 7 feet wide when raised and fanned out into a semicircle! Scientists believe that a peacock lifts and fans out its feathers in order to attract a female mate. You may notice that the feathers have round colorful spots, called ocelli. Once the train is displayed, peacocks have also been observed to move back and forth to create a shimmering effect on their colorful feathers, the first clue that the color in these feathers may be structurally significant!

These images were taken of a side view of green and brown areas of a feather. It turns out that the feather is made up of photonic crystals, shown as the oval or circle shaped parts of the image, and are made of melanin (the same kind of pigment in human skin). At the edges of these crystals is a protein called keratin, which connects them together in this orientation. The spaces in between the crystals are really just that, spaces filled with nothing but air. The distinction between the green and brown feathers are subtle, but by taking a closer look you may notice two differences. First, if you look from left to right across each image you may notice the thickness or number of layers of these photonic crystals is different in each image. The second difference is the orientation of the crystals. In the green feather the crystals are arranged in a near perfect square orientation, while the brown feather has more of a rectangular shaped spacing. This difference in arrangement means the crystals are spaced slightly differently; in fact, the spacing is at most only 35 nm different between the two. This study showed that the color observed in these peacock feathers is due to a combination of these two structural elements, the thickness and spacing of the photonic crystals.

These animals are beautiful examples of how nanostructures are prevalent in nature. While we may often associate nanomaterials with engineered nanoparticles, there is much to be learned from these naturally occurring beauties!