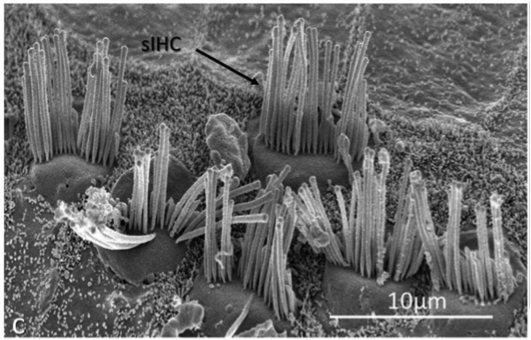 Nano in your ear! No, it’s not a childish taunt of nanotechnology adherents or a threat of nano-bots invading our bodies, but a fact of life – nature’s nanotechnology plays a key role in our ability to hear the world around us.

To me, “nano in the ear” is not just scientific – it’s personal. Like many adults, I suffer from significant hearing loss and have spent much of my life trying to deal with its many ramifications. One of the most common causes of hearing loss in adults is associated with the destruction of stereocilia, tiny little nanofibers within the inner ear that convert sound waves into electrical signals that our brains can detect. They’re nature’s microphone (or perhaps more correctly, nature’s “nanophone”).

What we think of as sound consists of little pressure waves in the air – regions where some of the air molecules are denser and some are less dense. These pressure waves enter the ear, hit the eardrum, and make it vibrate. Other structures in the ear transfer these vibrations into pressure waves in fluid that fills a special organ called the cochlea. Inside the cochlear fluid are some special cells called hair cells. Each hair cell in the cochlea sprouts a bunch of tiny nanofibers, called stereocilia,that convert pressure waves into electrical signals that then travel to the main body of the hair cells, and then to the auditory nerve and our brains.

The image below shows an electron microscope image of some human hair cells and stereocilia.  The stereocilia have different lengths that respond to different frequencies (pitches) of sound but are all about 200 nanometers thick. These little nano-cylinders are also extremely sensitive to motion.

So how do stereocilia convert sounds (pressure waves) into electrical signals?  As shown in the diagram above, embedded in the walls of our nano-scale stereocilia are some special proteins that form structures called ion channels. An ion channel is very special opening that can let specific ions (such as Calcium, Ca2+or potassium, K+) pass through the walls and into the interior of the stereocilia under certain conditions.2

When it’s quiet the ion channels are closed. When a sound causes the cochlear fluid to move, the stereocilia fibers bend, causing their ion channels to open, which then lets the positively charged Ca2+and K+ions flow through. Because Ca2+and K+ions have positive charge, their net motion down the length of the stereocilia represents an electrical current. Each time the hair cell gets bent it lets more positive ions in; these flow down to the main hair cell, which then produces electrical impulses that stimulate the auditory nerve cell and travel to your brain!

The stereocilia are amazingly sensitive:  even bending just a few nanometers generates an electrical signal. However, the response isn’t as simple as one might think. For quiet sounds, the current increases with the intensity of the sound wave (and the bending of the stereocilia). But as the sound gets louder, it gets to a point where the stereocilia simply can’t generate any more current. The limited loudness range over which the stereocilia can respond has important consequences for treatment of hearing loss.

There are many possible causes of hearing loss. For some people, hearing difficulties may stem from an inability to get the sound waves from the eardrum to the cochlear fluid and the stereocilia; in these cases various types of hearing aids and/or cochlear implants may be highly effective and helpful.

However, often noise-related and age-related hearing loss comes from damage to the stereocilia. Damaged stereocilia don’t generate the appropriate electrical signals, and so a person can’t hear as well.  You might think that simply amplifying the signal (using, for example, a hearing aid) would solve this problem, but the graph above shows why this approach frequently doesn’t work when many stereocilia are damaged. Just making the sound waves louder to jiggle the small number of remaining stereocilia more vigorously doesn’t generate the same electrical signals as jiggling many functional stereocilia more gently. As a result, hearing aids may not be very effective for this form of hearing loss.

As people live longer, age-related hearing loss will become an increasingly prevalent problem. It’s also important for those with normal hearing to recognize that the disabilities associated with hearing loss are complex, and that solutions that work for one person may not work for another.4 For people (like me) whose hearing difficulties arise from damage to the hair cells and their stereocilia, there are few proven options that are very effective.

However, there may be help on the horizon for cases where treatment options are currently limited. One recent study found that some hair cells could be regenerated in guinea pigs with noise-induced hearing loss using small interfering RNAs delivered by nanoparticles.5 While not yet a viable solution for human hearing loss, scientific advances in stem cell biology6 and nanotechnology are providing solutions to many other important societal problems. Therefore, strategies to advance our fundamental understanding of nanostructured materials, combined with advances in medical technology, may play an important role in addressing challenges associated with hearing loss by enabling damaged nanostructures like stereocilia to be regrown or replaced.