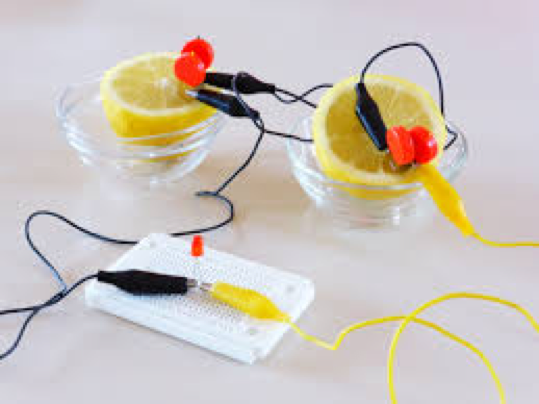 Have you ever used a poem or song to help yourself remember a complicated concept or a list that you were sure to forget? (Figure 1) As I sat and thought about the many times that songs and clever poems helped me to remember things like the history and progression of the atomic model or even how to spell Mississippi, I became curious about the role and utility of music in science and science education. It turns out that chemistry can enable music, create music, and in turn, music can be used to make nano-scale materials dance.

In an effort to make chemistry truly come alive, many researchers are developing ways to bridge the gap between chemistry and music. For example, one general chemistry lab uses an electrochemical cell and a lemon battery, along with a few other key components, to generate music.1

In this lab, students make use of recovered circuit board chips from musical greeting cards, like the kind that play Happy Birthday or your favorite holiday songs, to reinforce lessons on simple batteries. When copper and zinc metal strips are inserted into a lemon and connected by wire and clips to these recovered circuit boards, the musical circuit board comes to life. Previously, experiments like this one might have been done with something like an LED which lights up once the circuit is completed (Figure 2).

The lemon battery works because the lemon’s acidity (which comes from citric acid) serves as a reservoir to transport electricity. The zinc metal and the copper metal undergo a chemical reaction that sets up a flow of electrons from zinc through the wires to copper. This flow of electrons generates electricity, which powers the LED or the musical circuit board. As an aside: in the article about the musical battery lab experiment, the authors make the point of indicating how the experiments help or can be adapted for students with either hearing or visual impairments. Such experiments, and the focus on extending to students with visual and hearing disabilities, serve as an example as to how 1) music can be used to demonstrate chemistry topics that students may have trouble understanding and 2) how we can adapt existing chemistry labs for students with sensory disabilities.1

The Melodies of Chemistry

A lemon-powered greeting card song is great, but how do you actually create music from chemical processes? We know that chemical reactions and processes like nuclear decay (when an atom’s nucleus loses mass through radioactivity) occur over time. In chemistry, we often measure these processes using time in seconds. But music is not usually described in terms of seconds. Instead, it is described in terms like frequency and pitch, timbre, and rhythm. All of these properties, and many others, are what give music its richness and its quality.

A cool paper published in 2007 in Chemistry for Everyone discusses how to transform chemical processes into sounds we can enjoy.2 Sound itself is a vibration that moves through a medium, like air, as a wave (Figure 3). Many of our previous posts (such as this one) have discussed various properties of waves, one of which is frequency. Frequency, or the number of times an event takes place in a given period of time, is related to pitch (how high or low a sound is). Using a mathematical function called a Fourier transform to convert time into frequency, scientists can use the time that it takes for a chemical reaction or process to occur and translate it into things like frequency (pitch) and amplitude (loudness).

It turns out that some radioactive decay processes fall within a frequency range that the average human being can hear, which is about 20 to 20,000 Hz (cycles per second). An orchestra even worked to create music from the energy spectra of various radioactive isotopes. Even for chemical processes that fall outside of the typical range of human hearing, music theory can be used to let us listen in.

Sound as a Tool in Science: Acoustic Nanomaterials

Here in the Center for Sustainable Nanotechnology, we really care about processes that are happening at the nano-scale. It turns out that scientists have also used music to create complex nanostructures! In a paper published in 2014, low frequency sounds were shown to align supramolecular nanofibers (nanoscale fibers formed from many molecules) in solution.3 This alignment was in harmony with the music that was playing, responding to the tempo and the periods of rest. Although the power of sound in science has been thoroughly explored, this was a new and exciting effort to understand how audible sound can be used as a research tool. These scientists effectively created a material that can dance!

It turns out there is a strong relationship between music and science. Here we discussed how scientists have used lemon batteries to enable us to hear the sounds from old greeting cards, how music can be made from chemical reactions and processes, and how even nanomaterials cannot resist a good beat. Music in chemistry, whether as a tool for helping us remember things or for helping us hear chemical reactions, demonstrates the intersectionality between the sciences and the arts.