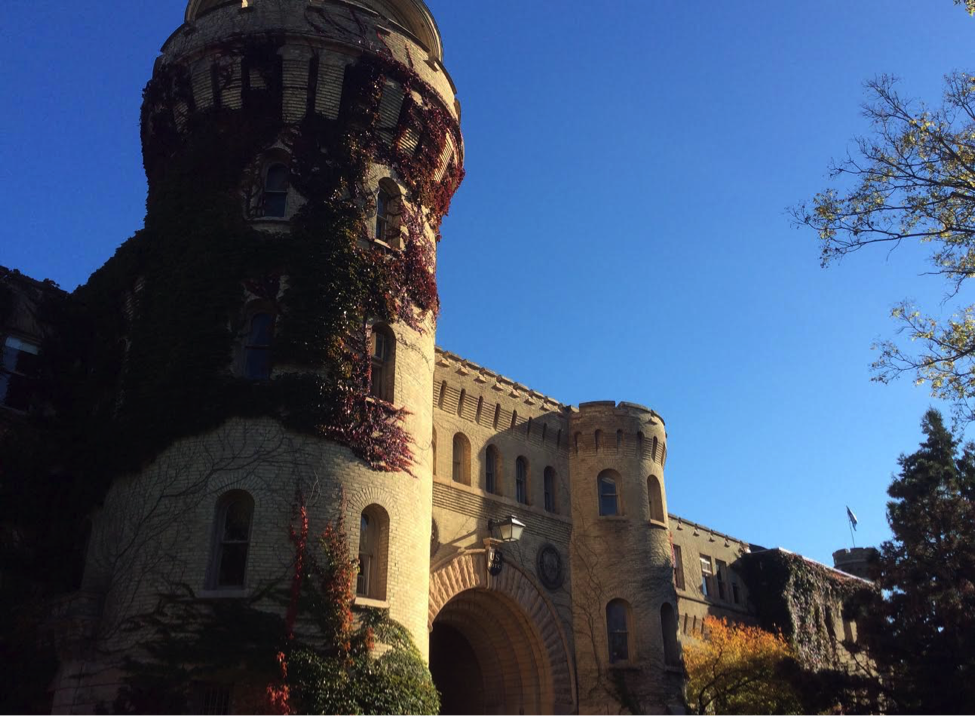 Climbing ivy is a part of the everyday landscape. For some, it is a nuisance plant which is notoriously difficult to remove from the sides of buildings. For others, it is a welcome verdant addition to the landscape. For recent college graduates and grad students like myself, it is a symbol of the noble pursuits of academia as well as a picturesque addition to the campus landscape. But most of us don’t think about the nanoscale science behind the leafy decoration.

So how does ivy get up all those tall buildings? When I climb a rock wall, I use physical force to pull or push myself up to nooks or protruding hand-holds. Friction and mechanical forces are a key component of this process — I can’t climb on glass or other smooth surfaces. There is an animal that can, though: the gecko. The gecko is able to climb smooth vertical surfaces through the use of van der Waals forces. (For more details see this blog post.) You’ve probably noticed that ivy seems to climb largely on rougher surfaces such as brick walls. So, is ivy more like you at the gym’s rock wall or more like a gecko?

This question of how ivy climbs goes as far back as the 1800s — Charles Darwin also pondered it. To investigate, Darwin placed English ivy (scientific name: Hedera helix) against glass and noted that it secreted what he described as a “little yellowish matter.”1 Unfortunately, in 1875 Darwin lacked the technology to investigate the mysterious case of the yellowish matter much further. Today, more powerful imaging techniques like atomic force microscopy have allowed scientists to learn a lot more. It turns out that the mysterious yellow secretion is indeed the secret to English ivy’s ability to scale buildings.

But before explaining more, we need some understanding of the anatomy of ivy. Unlike most plants we encounter in our daily lives, ivy has aerial roots. That means that the many tendrils growing up a wall infested with ivy are not stems but roots! Those roots have protruding rootlets, small tendrils coming off the main root, which are the key to tracking down our ivy league nanoparticles.

In 2008, scientist Mingjun Zhang and colleagues carefully investigated these rootlets.2 With optical microscopy, they found that the rootlets have a star-shaped pad at the end called an “adhering disk”, where the rootlets are attached to the surface the ivy is climbing. Each adhering disk has 4 to 7 fingers, and the fingers are what secrete Darwin’s “yellowish matter.”

So, the source of the secretion had been identified! The next step to solve the mystery was to determine what the secreted yellowish matter was. To examine its form and structure researchers used atomic force microscopy (AFM). We have a previous post about AFM here at Sustainable Nano, but here’s a quick refresher:

Choose a surface around you — the carpet, the desk, or even your keyboard. Close your eyes (but read the rest of this first!). Run one finger across that surface. Could you draw a picture of that surface from how it feels? Could you draw the picture to be the correct size by remembering the relationship of the surface to the size of your fingers? (Okay, now close your eyes and try it out!) This is similar to how people read Braille — chances are that if you are a Braille reader you’ll be a lot more accurate at this exercise than people without so much practice!

AFM works in much the same way. A cantilever with a very small tip slowly moves across a surface like you move your fingers. A laser on the surface of the cantilever detects the distance of the cantilever tip from the surface, much like you are able to sense the vertical position of your fingers (this sense, the ability to know where your body is positioned even without looking at it, is called proprioception). AFM is like a materials scientist’s sense of touch, allowing them to determine the shape, structure, and topology of a surface with much more detail than your fingertips can detect.

Using AFM, the researchers found that the ivy’s yellowish matter contained nanoparticles. These ivy-secreted nanoparticles were remarkably uniform, at approximately 70 nm in diameter and 20-30 nm high. But what were they made of? Further analysis revealed that these nanoparticles were made of 19 different organic compounds. Although we know the chemical formulae for these compounds, the exact structures are still being studied. The general structure is known to be a long molecule with a carbon backbone, a polar “head,” and a non-polar “tail.” This suggests that these nanoparticles hold onto the surface through hydrogen bonds, a non-covalent interaction like van der Waals forces but even stronger.

So, is ivy more like you on the rock wall or more like a gecko? The answer is that ivy is more like a gecko because it uses nanoparticles to generate a non-covalent interaction to stick to and climb surfaces. Ivy is less like you. Because it uses a hydrogen bond climbing mechanism, it doesn’t need large features to hold on to and doesn’t require joints or complex mechanical actions that humans use to climb. Unlike other climbing plants, these secreted nanoparticles allow it to climb without a trellis or stake to wrap around. Although ivy appears to have a preference for rough surfaces like bricks, it can climb smoother buildings (such as vinyl sided homes). The hydrogen bonding through secreted nanoparticles explains this flexible and adaptable climbing mechanism. Aside from answering the question that perplexed Charles Darwin, the discovery of these ivy nanoparticles may inspire new adhesives, influence engineers to develop new climbing technologies, or maybe open up technologies that synthesize nanoparticles biologically.