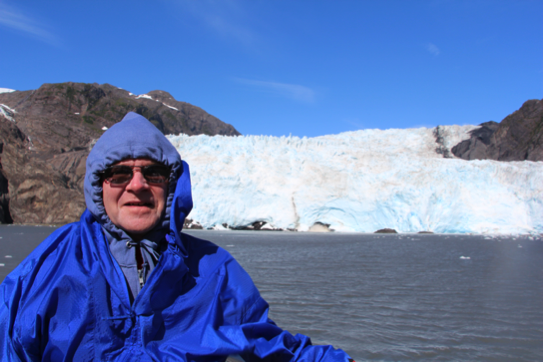 Recently I had the fortune to visit the state of Alaska. While there, I took a boat trip around the Kenai Peninsula, where there are glaciers moving from the Harding Icefield toward the ocean. As our tour boat approached Holgate Glacier, I was awed by the immense size of this giant wall of ice, but I was even more surprised by the fact that the glacier is a mottled mat of white and absolutely gorgeous blue. Not a bright color, but a very distinct bluish-green, probably more accurately referred to as “cyan.”

Living in Wisconsin I’m used to snow and ice being white… sometimes dirty brown, and sometimes yellow(!). But never blue. I pondered this for some time as the boat drove around. What was causing this beautiful color? And why were some areas white and some areas blue?

We know that the sky is blue because light waves from the sun interact with microscopic density fluctuations in the air as they pass through the atmosphere, scattering blue light sideways into our eyes. But could this also explain why the glacier is blue? The short answer is “No.”

To get to the bottom of this, I did some reading and discovered that the blue color of the glacier comes from an entirely different phenomenon, called overtone vibrations.

It turns out that overtone vibrations aren’t so hard to understand, and there’s a strong analogy to the sound of musical instruments. Water (H2O) can be thought of as balls (the H and O atoms) on springs (the bonds holding the atoms together). When light interacts with water molecules it jiggles the atoms along their bonds, and if the light has just the right frequency (or wavelength), the light will be absorbed and that absorbed energy will keep the atoms vibrating.

It’s a lot like a musical instrument. Each string of a violin or a piano has a specific frequency, called the fundamental, that can be excited with the violin’s bow or a piano’s hammer. For example, a violin’s A string is tuned to a frequency of 440 Hz, but you don’t just hear a 440 Hz tone when that string is played. You also hear overtones: resonant frequencies that are higher than the fundamental. (You may have heard of harmonics – these are specific overtones that are whole number multiples of the fundamental frequency.)

Here’s an example of a 440 Hz tone generated by a computer, without overtones:

And here’s an example of a 440 Hz musical note played by a violin, including overtones (from the University of Iowa Electronic Music Studios:

But what about the overtone vibrations in our glacier? Well, it turns out you can also excite the molecular vibrations in water molecules using light whose frequency is 2, 3, 4, or even 5 times higher than the fundamental frequency of the O-H vibration. These are the “overtones.” The fundamental and the first few overtones can only be excited with infrared light that our eyes can’t see… but the 4th and 5th overtones can be excited very weakly with light in the visible red frequency range. The overtones in a musical instrument are what produce much of richness of the instrument’s sound; and so it is with molecules, too.

Now we have all the information to understand what makes glaciers blue. “White” light is a mixture of all colors of the spectrum. As white light from the sun passes through a glacier, the red frequencies excite the overtone vibrations of the O-H bonds in the frozen water, and so the red light is partly absorbed while the other colors pass through. When the remaining light finally comes out of the glacier, we see the light as a blue or cyan color. (For a reminder about how we see color based on absorbed and reflected frequencies of light, see this post.) The figure below illustrates this process; the graph in the middle shows the actual absorption spectrum of ice determined from very careful measurements by a group of scientists at the University of Washington.1

The water O-H overtone vibrations aren’t excited very easily and so sunlight isn’t absorbed very strongly – it has to pass through many feet of ice before the effect becomes important. That glass of water in your fridge and the ice cubes in the freezer? The are small enough that they will always look white or transparent.

Epilogue: You might be wondering, “is liquid water really blue too?” The answer is YES, for exactly the same reasons.2 However, swimming pools often have their bottoms painted blue, so that’s clearly cheating! And reflections from the sky make it difficult to sort out all the different reasons why water appears blue. With the big vertical wall of a glacier it’s more obvious when overtone vibrations are involved because some parts are very blue and other parts are white. The bluish parts are very dense ice, while the white parts are covered with snow. Snow simply scatters the light but doesn’t absorb it, so the snow still looks white.

Note: This post was updated on Sept 6, 2016 to add a link to the University of Iowa Electronic Music Studios, the source of the violin audio example.