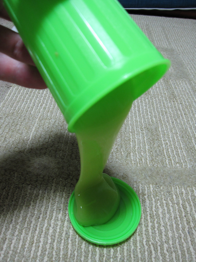 Is it a solid? Is it a liquid? It behaves in a way that reminds us a little of both. But what is it? Slime! (Figure 1) Making slime is a majorly successful activity used to illustrate a number of scientific concepts. While this activity is usually reserved for classrooms, or live demonstrations intended for children, I have also seen plenty of adults light up at the mention of slime time. Not to mention, there are literally hundreds of videos online of adults playing with and manipulating slime by adding beads and glitter. When people use slime as a science demonstration or classroom activity, they usually discuss borax, polymers, and for more advanced groups, crosslinking. (The American Chemical Society has this activity listed on their site and they do a great job of talking about how this all works).

But it turns out we may have been showing the wrong structure for borax all along! Whoops!

In a recent article in Chemical and Engineering News, Mitch Jacoby discusses how so many of us have gotten it wrong when it comes to explaining what is supposed to be a simple chemistry demo.1 The mistake was even more surprising because of the widespread industrial utility of borax.

Borax is a compound that contains both boron and oxygen, and (like sugar) consists of many crystals. Crystals are solids whose chemical structure follows a pattern and you can learn a lot about them from Cathy Murphy’s post on the atomic differences between diamond and graphite. In early papers about borax, the first of which was published in 1956, scientists described its crystal pattern, and the same structure was confirmed in several papers thereafter. Early studies showed that boron adopted two types of positions. Yet many teachers, publishers, and demonstrators who have shown the chemical structure of borax during demonstrations – and even scientists who work on boron chemistry – have been showing the wrong chemical structure!

Since the C&EN article does such a great job of outlining where we might have gone astray, I will only list a few lessons to be learned:

Scientists are human and are therefore fallible. But it is hard to imagine how such a mistake could persist for so long. The answer is that we don’t know how this mistake first arose or how it became so widespread. But it is time to update your demonstrations kit and make sure that you are using the right information.

How do we know the crystal structure of a compound? We shared a video from the American Chemical Society that describes how we can see atoms. You can check it out here.